KINSHASA, Congo — He struts down the muddy, trash-strewn alley like a model on a catwalk, relishing the stares and double-takes from passersby.

In a country where many survive on 30 cents a day, Papy Mosengo is flashing $1,000 worth of designer clothing on his back, from the Dolce & Gabbana cap and Versace stretch shirt to his spotless white Gucci loafers.

But Mosengo can scarcely afford this passion for fashion. He worked eight months at his part-time job at a money-exchange shop to earn enough for the single outfit, one of 30 he owns, so he’ll never have to wear the same one twice in a month.

He doesn’t own a car. He lets an ex-girlfriend support their 5-year-old son and still lives with his parents, sleeping in a dingy, blue-walled bedroom that is more aptly described as a closet with a mattress.

Friends, family and his new girlfriend implore Mosengo to stop pouring all his money into clothes and liquidate the closet.

"Man, we could buy a house with the money," said Dirango Mubiala, his clothing dealer, estimating that Mosengo spends $400 a month.

Mosengo won’t budge. "This is just what I am," he said from behind a pair of oversized white Gucci sunglasses. "I’m a Sape."

Mosengo is part of a fashion cult born decades ago in this Central African nation, its name drawn from French slang for clothes.

Before bling and ghetto fabulous, before the dawn of the metrosexual, Congolese men have been pushing the limits of outlandish fashion and heterosexual male vanity, roaming the streets like walking advertisements for the world’s top labels. These fashionistas were donning fur coats and gaudy jewels as early as the 1970s, when American hip-hop star Sean Combs was still accessorizing with a grade-school lunchbox.

"The white man may have invented clothes, but we turned it into an art," said Congolese musician King Kester Emeneya, who helped popularize the Sape movement with the legendary Papa Wemba, who is often called the pope of the Sapes. Emulated and admired by a generation of African musicians, Wemba once called fashion his religion, advising devotees that what they wore was more important than school.

Some saw the movement, which dubbed itself the Society for Leisure Lovers and Elegant Persons, as a rebellion against former dictator Mobutu Sese Seko, whose patriotic programs included renaming the former Belgian colony Zaire and replacing European fashion imports, such as suits and ties, with traditional African garb.

Wemba laughed off any political motivations.

"It was never about that," he said recently. "It was just about looking good."

His cult survived years of conflict and economic devastation in Congo.

After Mobutu was chased away by rebels in 1997, the country, renamed the Democratic Republic of Congo, endured nearly five years of civil war and invasion by neighboring countries. An estimated 4 million died of hunger and disease, which continue to beset parts of the northeast. International leaders hope last month’s presidential election — the first democratic ballot in more than 40 years — will jump-start the rebuilding process.

AS the Sape movement has endured among a tightknit group of musicians and well-off businessmen, it also has inspired, for better or worse, a new generation coming of age amid violence, poverty and uncertainty.

On a recent Saturday night along the main drag of Kinshasa’s Bandal district, a small gang of young men sipped warm beer, watching the crowd watch them.

Most are twentysomething and unemployed, their only money coming from dealing cocaine, opium and marijuana.

There’s little question where the money goes. They ticked off their designers like actors on the red carpet. Yves Saint Laurent. Jean Paul Gauthier. Thierry Mugler.

One wore his leather Versace coat inside out to show off the label.

It made little difference to them that they sat at a grubby plastic table near an open sewer line. A blackout had cut electricity in the neighborhood, leaving them and their clothes visible only by the headlights of passing cars. Reared in an era that has offered them little hope or opportunity, they said they draw their identities and self-worth from what they wear.

"When I dress this way, and sit here with a beer, no one can touch me," said Patou Coucha, 29, in a tomato-red Paul Smith suit with thigh-length coat. It took him a month of selling cocaine to raise $1,500 for the outfit, which was bought secondhand by a friend in Europe. "I don’t hear anybody else. I do what I want."

Japanese designers are the hottest right now, they said. Yamamoto and Miyake. They pooh-poohed American rappers and hip-hop stars for copying their style.

"They don’t really know how to dress," said Dede Forme, 27, wearing red Dolce & Gabbana pants and a matching sailor shirt. "We’re the one setting the tone." 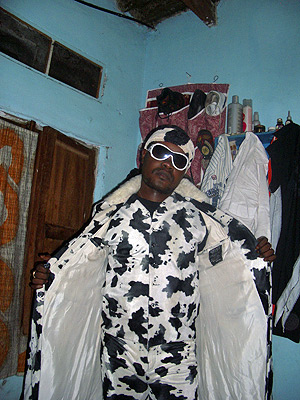 They are one of many Sape gangs in Kinshasa, calling themselves 100 Years War. Rivals in other neighborhoods include Endless War, Europe of 12 and 1,000 Years War.

They don’t carry guns and rarely brawl, but occasionally they invade one another’s turf, dressed to the nines, of course, in what they call a "Defi de Sape," or fashion challenge.

"If we see them walking down our street, we run home, change into our best and come back out to prove that we’re not nobodies," said Willy Biselele, 28, a leader of the 100 Years War.

The winner is the team with the most expensive or rarest collection. One recent standoff was televised by a local station.

Back at his parents’ house, Mosengo was preparing for a night out at a friend’s wedding. He planned to wear his most prized possession: a Versace black-and-white leopard-print suit with matching cap.

He rummaged through clothes piled on the floor, climbed over 100 pairs of jeans packed in five large suitcases, and sorted through shirts and shoes hanging from nearly every inch of the wall. Neighbors have nicknamed him "Bilele," the Lingala word for clothes.

"I really need my own place," he grumbled.

As he dressed, Mosengo spoke awkwardly about his future. He failed his high school exams four times before passing and has no career ambitions, other than perhaps one day turning his closet into a clothing store.

When a visitor tried to take his picture before he’d finished dressing, he modestly held up a shirt to shield his pudgy face or ducked out of the way.

Minutes later, after he donned the Versace suit, Mosengo was transformed. He emerged from his bedroom a rock star, raising his chin with thuggish aloofness, mugging for the camera.

Seated nearby on a couch, applying a milk facial before the night out, his girlfriend shook her head.

"He wastes a lot of money," said Nancy Kalemba, 24. "To be honest, I don’t really like it. I’d rather he spend the money on something else. Not necessarily me, but on his future."

Clothing salesmen Papy "Vedelo" Siamina, 33, caters to the Sapes. Those who are wealthy enough sometimes change their clothes twice a day.

"Everything must be designer, even down to the underwear," Siamina said.

Clothing salesmen aren’t the only beneficiaries of the Sape movement’s push into lower-income neighborhoods. It has helped spawn an unlikely cottage industry: roadside manicurists. Rather than visit pricey beauty salons, struggling Sapes receive the obligatory nail shines from street kids, many of the onetime shoeshine boys who now carry portable manicure kits and signal customers by clinking tiny glass bottles.

"They can’t live without an appointment every two weeks," said manicurist Akunia Dimu, 21, adding that nearly half of those buying his 20-cent manicures are Sapes.

AT his mansion in Kinshasa, where he was auditioning singers for his band in the garden, Papa Wemba said it pained him to see impoverished young men overextend themselves in an effort to live up to the movement he helped create.

"That’s not what I wanted," Wemba said. "They’re not being responsible."

Recently Wemba softened his devotion to fashion, particularly after he was imprisoned for illegally smuggling Africans into France by claiming they were part of his band’s entourage. He came out of jail professing a renewed commitment to Christianity.

"Now we just want to dress to cover the body," Wemba said, even though he was wearing pastel plaid Romeo Gigli pants and a printed shirt by a new designer called Kassamoto, whom he is helping to promote in Congo.

"I really regret it," he said. "We set a bad example. If I had invested my money instead, I would own several houses. It was like a drug."

Across town, taking a break from his job at the money-exchange shop, Mosengo considered the words of his mentors. He reflected a moment and then nodded.

An epiphany? Was he ready to quit the clothes?

"Those guys did spend a lot," he said from behind the Gucci sunglasses. "But that’s not me." 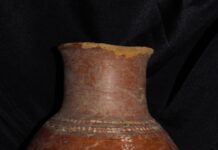 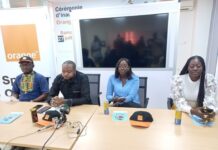 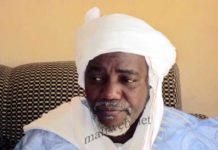