U.S. military planners have begun to help organize a multinational proxy force to intervene next year in Mali, the famine-stricken, coup-wracked African country that has become a magnet for Islamist extremists, U.S. officials said Wednesday.

The international force would be led on the ground by several thousand Malian and West African troops but would receive extensive support from the Pentagon and the State Department, which would help train, equip and transport the troops, Obama administration officials said.

U.S. officials said the Pentagon’s planning efforts are contingent on the U.N. Security Council’s endorsement of the African-led force. U.N. officials and diplomats from other countries have said that U.N. approval is likely and that the military operation could begin next year.

The disclosure that U.S. military planners have started to prepare for the intervention was made by officials from the State Department and Pentagon at a Senate hearing Wednesday. It was the clearest sign yet that the administration has decided to take a more aggressive stance against al-Qaeda’s growing affiliate in North Africa and to try to restore order in Mali, a Saharan country on the verge of collapse.

A military operation in Mali, however, will inevitably be messy and unpredictable. The chronic instability in the country, one of the world’s poorest and riven by tribal divisions and corruption, has rapidly worsened since Islamist extremists took control of northern Mali — a chunk of territory the size of Texas — this year.

Other U.S. officials said al-Qaeda’s North African affiliate, which for years attracted limited global attention, poses an increasing threat. The group has become well-stocked with weapons smuggled out of Libya after the NATO-led war there last year. It finances its operations by smuggling rackets and by kidnapping foreigners for ransom.

At the same time, U.S. officials acknowledged that the group has not demonstrated an ability to launch terrorist attacks outside the region. Some independent analysts have questioned whether the administration’s strategy could backfire by embroiling the United States in an in­trac­table local conflict.

Amanda J. Dory, the Pentagon’s deputy assistant secretary for Africa, said the U.S. military has been able to gather intelligence to help shape the international force to fight Islamist extremists in northern Mali.

Dory emphasized that no U.S. ground troops would enter Mali, but she would not rule out the possibility of the Pentagon contributing U.S. warplanes to transport African troops or provide them with aerial cover.

“We definitely don’t know how that would work out,” she said.

U.S. law restricts the United States from providing direct military assistance to Mali because its democratically elected president was ousted in a coup in March. The coup was led by disaffected military officers who said the president, Amadou Toumani Toure, had not dealt effectively with the Islamist rebellion in the north.

The Pentagon had to withdraw Special Forces troops and other trainers and cut off military aid. The coup leader, Capt. Amadou Sanogo, had received training in the United States as part of a program to professionalize Mali’s tiny and ill-equipped army.

Administration officials said they want the remnants of Mali’s army to lead the international force. But because of U.S. law, the Pentagon must funnel equipment and other aid through West African nations, the European Union and other countries.

“That’s a pretty significant impediment, and we’ve got to figure our way through that,” Army Gen. Carter F. Ham, the commander of U.S. forces in Africa, said Monday during a lecture at George Washington University.

The rupture in military relations with Mali also has hampered U.S. efforts to obtain intelligence about al-Qaeda fighters who have found a haven in northern Mali.

The U.S. military had operated surveillance flights over Mali for years, flying small unmarked turboprop planes equipped with high-tech sensors to monitor the movements of Islamist extremists. Aircraft for the classified program, code-named Creek Sand, are based in next-door Burkina Faso.

After the coup, however, the U.S. ambassador to Mali, Mary Beth Leonard, ordered a halt to the surveillance flights, fearing that if one of the planes crashed its crew could be taken hostage by extremists, according to a senior administration official who spoke on the condition of anonymity to discuss details of the sensitive program. As ambassador, Leonard has the authority to approve or reject the presence of U.S. personnel and programs in the country.

The Creek Sand aircraft are operated by U.S. contractors who do not wear military uniforms and can effectively work undercover. The surveillance flights have continued in other countries. Some of the planes relocated to Niger to monitor the flow of Islamist fighters and smugglers across the Sahara from Libya to Mali, the senior administration official said.

The Pentagon is still able to operate high-altitude surveillance flights over Mali using P-3 spy planes and unarmed Global Hawk drones. But those aircraft are based in Europe and must travel much longer distances to reach northern Mali. They also require overflight permission from other countries in the region, such as Algeria, which is granted only on a case-by-case basis, U.S. officials said. 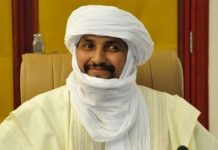 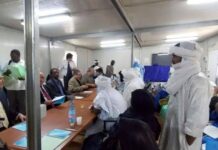 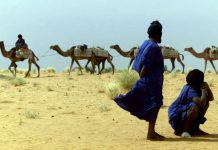